How to eat like a Vegan (Plant Based Eating)

The first thing I should say before any of this is: consult your doctor before you make any kind of health changes. However, keep in mind, most doctors are not trained in nutrition (and some nutritionist are just plain misinformed as well). Nevertheless, doctors can draw labs and tell you if you’re going to do something that would hurt yourself which, I am sure you would agree, is nice to know.

Another benefit of talking to your doctor: I had my doctor draw labs on me before I really started, and being able to watch the change was incredibly motivating (and made my unsupportive doctor’s jaw drop every time I went to see her. She is now supportive).

Do your research, check with your doctor, and get second opinions if possible – it’s your body, and it’s the only one you get.

Let food be thy medicine and medicine be thy food.

I am not going to try to persuade you to go vegan or eat a plant based diet (at least that is not my main intention). I am assuming you are one of my friends who asked me about this, watched Forks Over Knives, Earthings or something similar and are looking for some… let’s say cliff notes from someone who’s recently made the change.

These are my notes on my journey and my answers to some frequently asked questions. While some are snarky (as per usual), I hope they are helpful.

What is a Vegan? What is a plant based diet?

First we need to talk about what we’re talking about. These can be dangerous waters, and can make people get into bouts of fisticuffs on the interwebs. It’s important to know the difference (if only to help with Google searches).

A Vegan is someone who does not eat animals, and does not purchase anything that is made from animals (as much as humanly possible). A vegan morally objects to using animals as a commodity. From the vegan society:

Veganism is a way of living that seeks to exclude, as far as possible and practicable, all forms of exploitation of, and cruelty to, animals for food, clothing and any other purpose.

Eating a plant based diet means that one refrains from eating animals and animal byproducts. What one eats consists of vegetables, fruits, legumes, nut and seeds, etc.

While eating like a vegans and plant based diets have similar underpinnings, they are done for very different reasons. This is just something to be aware of if you start eating a plant based diet – doing so does not mean you are a vegan.

As a concrete example, a vegan wouldn’t buy a leather belt, a fur coat, or approve of a zoo, a dog fight or a traditional circus. Someone eating a plant based diet might have no moral objection to any of those.

Drop diet from your diet.

I personally don’t like to say “diet” because now the word “diet” just conjures up visions of a week long extreme change in how much junk one eats. Or, perhaps, some unsustainable juice cleanse. A “quick fix” (which almost never gets one closer to better health). However, in the real definition of the word, everything has a diet:

diet 1 |ˈdʌɪət| The kinds of food that a[…n] animal, or community habitually eats.

Everything in this post is about a life change. Not a short term goal; a way to live. For me, this is the only way to approach better fitness and nutrition. To fix the damage one has done to ones body over many years will take many years to fix.

I was lucky enough to see some quick early gains, but I don’t expect to reach any of my pie in the sky fitness goals for at least 2 or 3 years (if I am lucky).

I started eating like a vegan around 2005. I say I did it on a bet, but it was because a friend of mine was a vegan and I just wanted to see how hard it was. I wound up losing heaps of weight and I felt great – my normal “not trying to do anything” weight fell from 200lbs or so to 185lbs (84kg).

After I read about the hormones and antibiotics that are given to animals, and how some countries disallow the import of American meat I continued to not eat it. Until, that is, we moved to Australia in 2008. 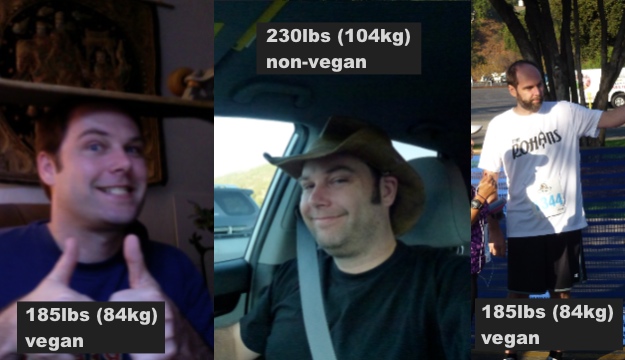 Once in Australia, I assumed it would be fine to start again. I did, and I ballooned up in no time. Luckily for me, in the middle of 2011 I got food poisoning from a hamburger. I was sick as a dog, and decided to go vegetarian. Never wanting to feel that horrible again, I swore off eating meat forever. It seemed to be perfect timing anyway as we were also moving back to the states.

After a few months of being back in the states, I decided to go vegan (this time on a bit more ethical footing). I gave up eggs and dairy, and I decided to track everything to monitor my weight, nutrients, and my lab work. 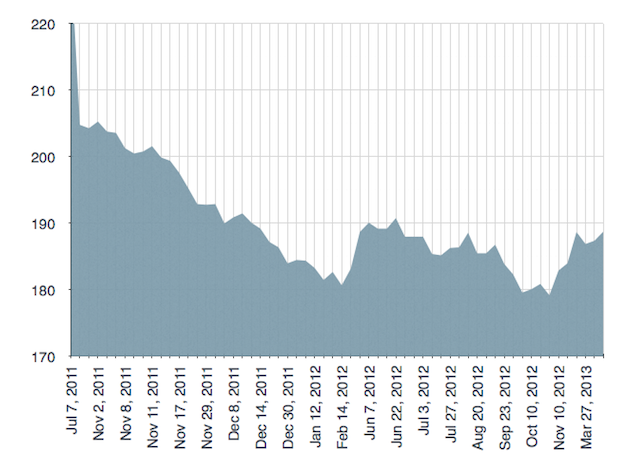 As you can see by the weight graph above (lower is better :D), initially, my weight dropped tremendously. It was easy to keep the weight on while eating cheese and other milk products (called liquid meat in the vegan circles). Once I stopped eating dairy, I dropped about 25lbs in about three months. Mind you, I didn’t do anything other than stop eating dairy products and start eating vegetables more regularly – no new exercise or anything like that.

From that point the weight started to slowly come off, and became pretty stable around 185lbs (84kg) again.

I don’t feel very comfortable posting my lab work on the internet, but they more or less mirrored the weight graph. The bad stuff dropped like a rock, and the good stuff shot up like a rocket.

Around August 2012 I started to feel like I had so much more energy that I started to run 5Ks. I am now on my way to running 10Ks, but I want to point out that I lost weight and my labs got way better before I started running – not because I run! (Everyone seems to want to attribute the weight loss to the exercise. It wasn’t. It was the change in my diet.)

Here is a breakdown of a typical days eating when I am in running training mode: 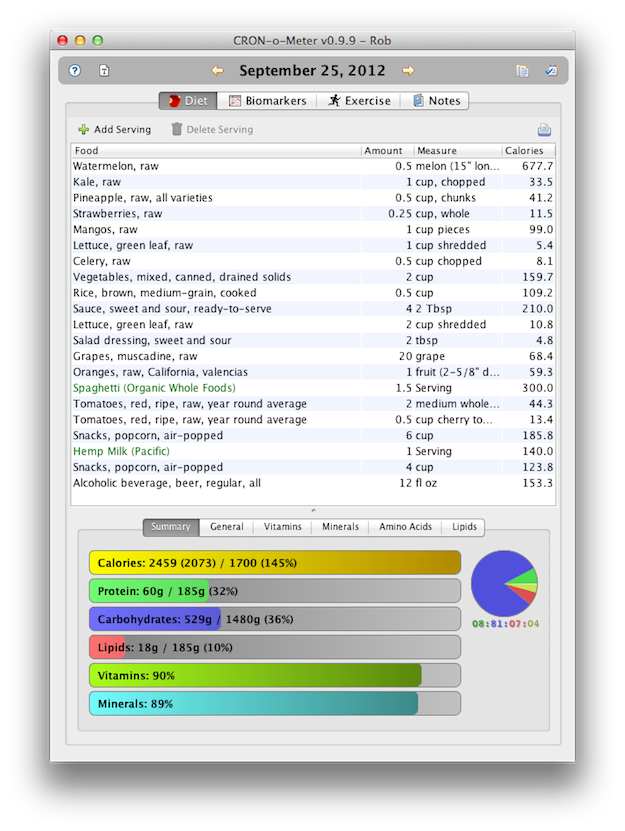 I’d also like to point out it has been almost two years now, I haven’t gained any significant weight back, and I don’t count calories or any such nonsense. I am 40 years old.

What do you eat? Where do you get your protein?

You know, food! First off, everything has protein. Secondly, that whole protein thing is a myth. 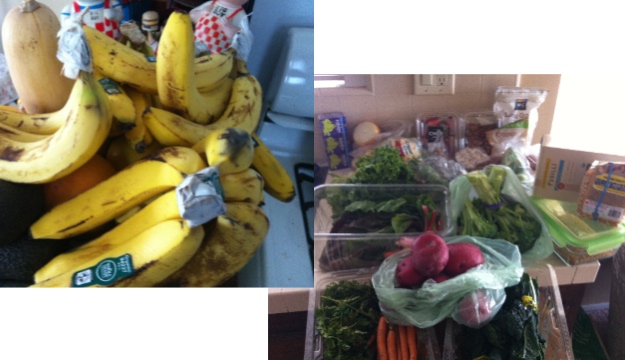 We surprisingly get asked these question a lot. The jokey “comeback” in the veg*n community is: “Why do you try to filter your nutrients though another animal?”

But it is, inadvertently, a valid question because in western society we put animal remains in damn nearly everything!

Aside from whole foods (not the store, actual whole foods) I can’t specifically tell you what I eat because there is so much variety. As an example though, here is what I eat on a basic day:

Those are my simple no-brainer meals. There are tons of cookbooks out there with super fancy and delicious things you can make. We do go all out sometimes, but we are often too busy or too lazy and just want something quick and tasty.

Fruit: there is no faster food.

These are important to be sure! Do some research on this for yourself, but taking a B12 supplement in my opinion is crucial. B12 deficiency can cause irreparable brain damage!

The bummer about B12 is many, many people don’t get enough of it. This is not a vegan problem, it’s just a problem. It can’t hurt to get it checked regardless of if you’re a vegan or not.

You can also get B12 from almond milk, rice milk and soy milk, but in addition to those we take a sublingual supplement anyway. We like our brains.

Omega-3s help make your heart work (that’s the scientific definition too I think). From what I’ve read, 2 tablespoons of flaxseed a day provides me with enough Omega-3s. Do your own research on this, but there are plenty of plant based sources of Omega-3s.

Carl Lewis, Mac Danzig, Jim Morris, Rich Roll, Billy Simmonds, Jack Lindquist and many, many others would say no. In fact, there are arguments to be made the opposite is more likely - do you currently feel energized after eating a big meal or do you feel like taking a nap?

You might be thinking of vegans who live off “junk food”, or have images of goth teenagers (who don’t eat right in the first place). Vegans can be lethargic, but many are not.

I don’t know, maybe you can look it up on the $800 cell phone in your pocket.

In the long run, I can’t see how it is. You’ll have a lower risk of all kinds of aliments, maybe even reduce some of your current medications. The meat industry is subsidized by the government, so their prices are artificially low. I don’t think the maths are as simple as people want to make them out to be.

We get a lot of our food from our local CSA and we find it reasonable. There are reasonably priced farmers markets all over the place. In some parts of the world you’ll have to travel a bit to get fresh fruit and vegetables.

Logistically it does take some work at first, but once you get a routine down it’s not hard.

How do you eat out?

We have a few vegan friendly places around town we frequent when we want to go out. Happycow.net is very useful for that. However, if we know we have to go somewhere that wont have any vegan options, we’ll eat before or after the event, and get something like a salad at the restaurant.

Also, if you really can’t find anything on the menu (or even if you can), it helps to tell the waiter you are allergic to dairy or even casein. If they think there is a chance you’ll go into anaphylactic shock, they will be able to find something.

Why would you put cheese on a salad? ಠ_ಠ

How do you eat when you travel?

Grocery stores are your friend, and again Happycow.net is great. But grocery stores and markets always seem to have fruits, vegetables, nut and seeds (and hummus)!

Ok, I think that’s all the common bits. I tried not to get into any of the polarizing bits, but you’ll find the subject of eating animals to be very polarizing (as I briefly mention below).

If you’re in one of my social networks, feel free to ask me anything about any of this I’ll be more than happy to share.

The following snippets might rile you up if you’re not thinking about going vegan / adopting a plant based diet. I don’t mean to offend, and it’s probably best not to go on if this is not your bag.