I've finished moving the basics of my work system from Mac to Ubuntu 9. Here is a screen shot of my desktop.

I put the system together from unused computer parts laying around the office. This would be considered an underpowered system by most people's standards, but it runs well - even the dual monitors and eye candy work seamlessly. It probably wouldn't do video editing very well, but it's powerful enough to run everything need, and doesn't skip a beat.

I have a list of apps that I need replacements for, and I'll try to blog my findings as I go. However, I have my critical path apps all set.

For my Textmate replacement I am using gEdit. gEdit doesn't do CFML by default. To remedy this I threw together these files to make it support CFML. It's very basic and really just uses HTML colouring, but it allows the whole system (and therefore gEdit) to understand .cfm, cfml, and .cfc files. 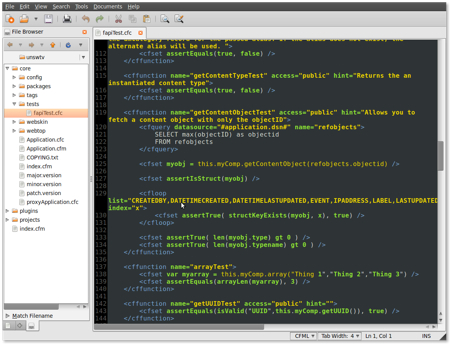 You can download the files here. You can run the install.sh file to add them to your system, or just look at that file and do what it does by hand (it's only 3 commands).

gEdit is missing a few things to put it on par with Textmate, but fewer then I thought. I used it all day today, and everything I needed it to do it did. (It would be nice if it supported Textmate bundles, but I think gEdit is more python based and Textmate more Ruby based.)

The good news, for me anyway, is I can probably add the things I want since it's open source.