FarCry makes heavy use of UUIDs. I am a fan of UUIDs myself, but in some instances they are a bit long. It seems like there should be a way to make them shorter and still have them hold their value. I had a need for a shorter UUID and set out to find a way to compress a UUID.

It kind of worked. It wont work for my purposes so it was a wash for me, but it was still quite a bit of fun and I figured I might as well get a blog post out of all the work.

After looking at it for a while, it dawned on me that all the characters are hex values… which means each value can only have 16 values… which means you should be able to fit it into 4 bits. If that’s the case, then (after the 3 dashes are removed), it should be possible to reduce the UUID by 50%.

First I set up a simple table to look up each value. Basically just: 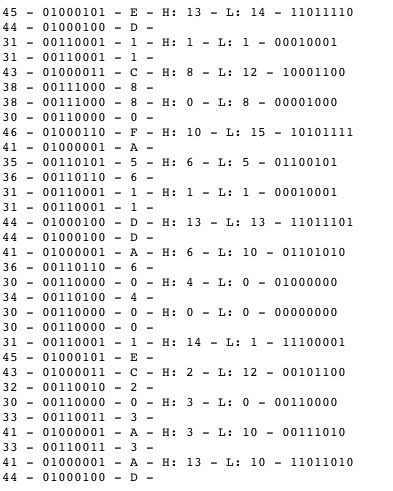 As you can see the 8 bits of output (far right) is the binary representation of the integer index to 2 of the actual Hex values.

It does indeed work, hooray!

Going in reverse, looping over eight bits at a time, breaking them into 4 bits, turning them into integers and then looking up the proper Hex value works equally well (as you would expect) 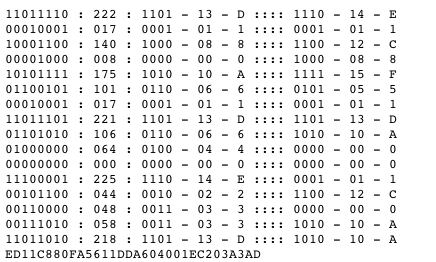 The reason this is a failure for me is that there doesn’t appear to be a way to pass this information in the URL. If you were to just look at this string, it would be gobbledygook since it has high ASCII and non-printable characters. It looks like this actually:

So… the whole thing was a “waste of time” (unless you have any suggestions).

It was fun to have my theory work out, but it was quite a let down that it’s completely useless for my needs.