Frequently Asked Question about Chinese on the iPhone

Most of the emails were referring to the post with the movie showing Chinese input on the iPhone, but some parts in the movie were a bit unclear. I responded to a few people directly, but this post will likely get more google search hits so it might be a bit more helpful.

How easy is it to type in pinyin?

To type in pinyin and have Chinese characters displayed is very easy. It is just as easy as it is on the desktop. Watch the movie linked above to see it in action. While there is a slight difference between the way pinyin input works on the desktop and how it works on the iPhone, the iPhone is extremely usable.

Here is a screen shot of what it looks like typing in pinyin to display Chinese characters: 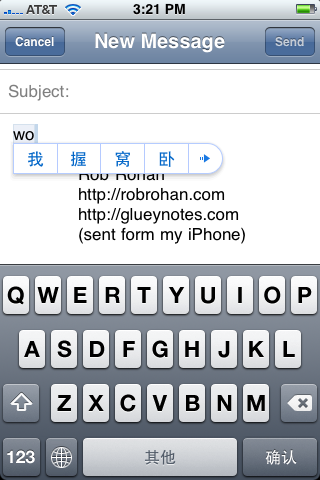 and if the character is not within the first four suggestions, the main view switches to a list of characters for you to choose from: 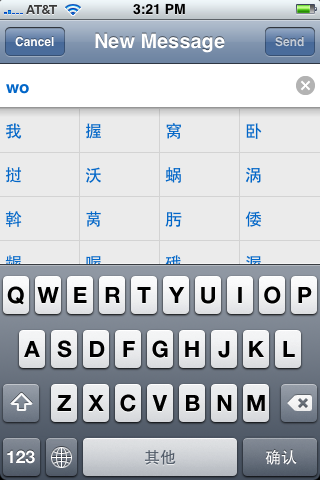 As for the “I can see the character, but I don’t know the pinyin for it” type input it looks like this: 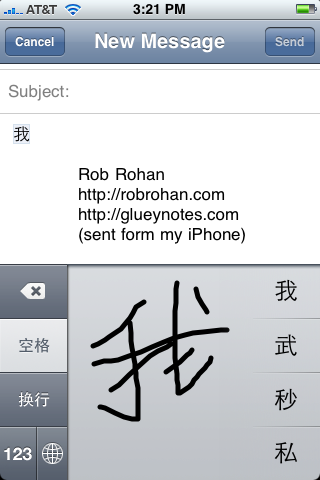 Do you need to switch the Phone’s overall language to Chinese to type in Chinese?

Nope. Apple got this right. You just go into Settings > General > Keyboard > International Keyboards and turn on any keyboard style you may want.

If you are daring, you can switch the whole phone into Chinese by doing Settings > General > International > Language, but you do not have to do so to type in Chinese.

Does the Chinese keyboard get in the way of the English one? How does switching the keyboard work? 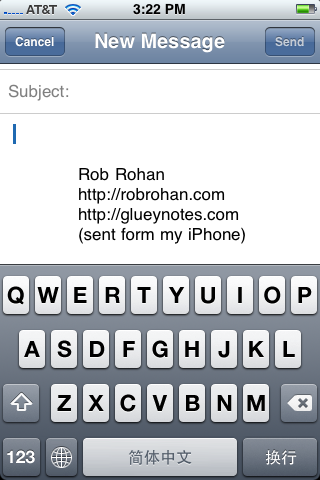 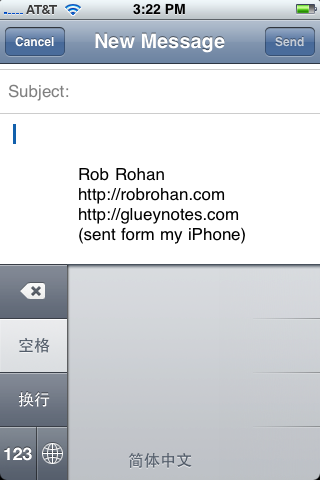 The phrase book you showed in the movie was neat, but I have a real offline Chinese dictionary via jailbrake - is there an iPhone 2.0 Chinese to English / 英文汉语词典 in the AppStore?

There is an application called “WeDict” by Hongtao Guo in the AppStore, but it’s not helpful to me yet. It only lets you search by English (“phone” for example) and the results are only in characters (“电话” for example). Not as helpful as I’d like. I’d like, as I assume most would, to be able to search by English, pinyin, or characters and get results in English, characters, and pinyin. WeDict is a great start though!

So, in essence, not that I know of. You can get the functionality by using dict.cn and / or nciku.com, but you need to always have an internet connection if you are going to rely on that - which is not always possible.

Can you use a stylus, or a pen, instead of your finger to draw the characters?

No, to register a touch the phone requires a finger (I think it’s the heat or something. Maybe a hot pen might work, but I am not going to try it ^_^)

Is drawing with your finger difficult? Does it respond well?

It’s a bit clumsy, and you won’t win any awards for penmanship, but it figures out what you are doing quite well. I haven’t had a problem yet, but I also do not know many high-stroke characters (I am leaning simplified). I could imagine it getting quite cramped with a very complicated character.

As to it responding well: I have one of the very first iPhones (4GB version, old school!), and the drawing response is a bit laggy. It has to catchup with my strokes at times. You might have to try it yourself to be sure (I am sure an Apple store will let you try).

I only use the drawing function to lookup the pinyin for characters I don’t know, and for that type usage it is very acceptable.

Do the keyboards work in landscape mode (when the phone is turned sideways)?

They rotate anywhere the other keyboards rotate. For example they work in Safari, but in not in Mail.

Those are more or less the questions I’ve gotten in the past week or so - I hope that helps anyone with similar questions. If you have a question, comment or suggestion, please feel free to post a comment.

Thank you again for all your kind emails.