I had my first Chinese class on Friday, and it was fun. It was hard, but fun.

The class is being taught by Pan lǎoshī (潘老师), and he stresses the use of pinyin and hitting the proper tones (as I am sure most teachers do). The tones are key to speaking Chinese well, he says.

So I needed to find a way to type pinyin with the correct tone marks (so I can print stuff out, and to get used to placing them properly). Openvanilla.org (which is fantastic at typing pinyin to get the simplified characters) doesn’t support typing accent marks on romanized characters, but after a bit of digging I found that Mac OS X does it out of the box (why am I not surprised).

You simply have to enable the U.S. Extended keyboard instead of the standard U.S. one (assuming you are using a U.S. setup that is).

To enable it go into System Preferences then International then click on the Input Method tab. Scroll all the way down and enable the U.S. Extended keyboard set (as seen in the following image)

Once you have the U.S. Extended keyboard enabled you can use the following key strokes to do the accent marks:

If you find these hard to remember, you can open the keyboard viewer for a while until you get used to it. When you hit the Alt key you can see which accents will stick to the next character you type. Here is a picture of the Keyboard viewer open while I am holding down the alt (aka option) key: 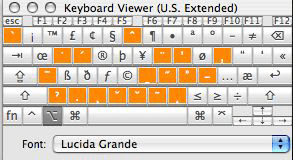